My adorable puggle Porkchop is a pretty awesome little dog.  He was abandoned at a foreclosed home by his previous family, and has been ever so grateful that I rescued him.  He plays with the kids and snuggles with us on the couch.  He lays so close to the fireplace in the wintertime that his harness gets hot.  He once curled up on my client’s feet and fell asleep, snoring and all.  And he is also very protective of his territory.

Like most dogs, he barks when someone knocks on the door.  He also barks anytime a car drives down the street we live on, when the neighbor’s cat stalks the field on the other side of the street, and when a doorbell rings on TV.  (This always cracks me up a little since we don’t have a doorbell.)  But he absolutely loses his mind when the mailman comes.  Our mailbox is out by the street, so he usually gets to go ballistic through the window at the mail truck, but the other day we had a package that wouldn’t fit in the mailbox.  And so the mailman came to the door.

Porkchop was insane with benign fury when he saw the postal worker at the storm door.  I tried to open the door to get the package with one hand  and keep him inside with the other hand, but to no avail.  He escaped onto the porch and attacked the mailman…by ferociously sniffing his pantleg.  The mailman, who surely dealt with angry mutts on a daily basis, just laughed, but my immediate reaction was to say, “He doesn’t bite.” 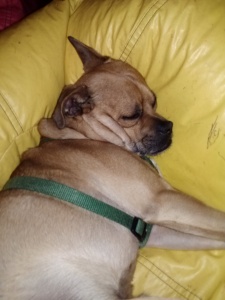 And he didn’t.  But I found myself thinking about it later.  What an idiot I would make of myself if as those words left my lips just as Porkchop wrapped his around someone’s ankle?  I can’t even imagine what the series of events might be.  Would it be just like on the Wizard of Oz?  “I’ll get you my pretty, and your little dog, too!”  I can promise you I would gladly run off to Oz to save one of my pets, but I realized that at the very least I need to rephrase my repertoire of oh-crap-the-dog-got-out phrases:

“He hasn’t bitten anybody, yet.”

“He only bites people that are a threat.”

“He won’t bite…unless I tell him to.”

I jest, but seriously I’ve put so much trust in my four-legged friend who has no knowledge of how the American legal system works or what could happen to him if he decided to become the guard dog he thinks he is in his head.  So it’s just a little food for thought for my fellow dog lovers out there.

If you enjoyed this post, please be sure to check out my other work on Amazon.

5 responses to “He Doesn’t Bite”