My Laptop, My Friend – a Tribute 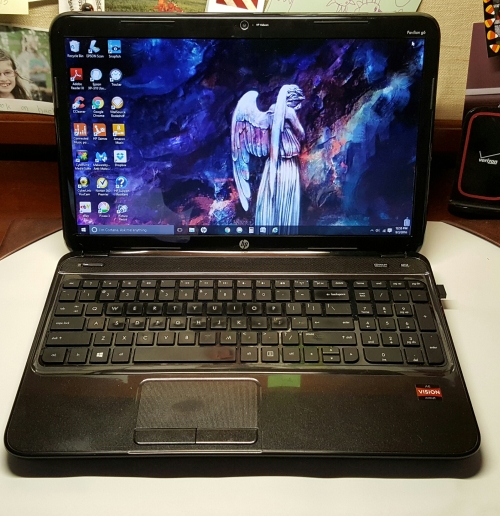 Goodbye HP Pavilion g6, also known as Excalibur III. You’ve been a good friend despite how heavy you are, how hot you get on my lap, and that wonky Windows 10 upgrade that made you turn off your trackpad for months and months until it suddenly began working again. Yes, we’ve been through some hard times, but there were plenty of good ones as well.

You put me through going back to college even though I felt like I was too old. We’ve written two books and launched a successful freelance career. I can’t even begin to estimate the thousands upon thousands of words that have come across your keyboard, and the only evidence is the fact that the N and the L are pretty much completely gone. But I knew where they were anyway.

I want you to know that your retirement will be a good one. You won’t be stuck on a shelf with the idea of someday going to an electronics recycling place or kept somewhere “just in case.” Instead, you’ll be going to my 10-year-old daughter. I know there’s still a lot of life left in you, but you’ll get to live it in the easy-paced world of 5th grade term papers and journal entries. The two of you can take care of each other. You’ll make her feel special and grown up, and she’ll let you know that you are still useful. Maybe someday you’ll help her write a book, too.

Filed under On Writing

2 responses to “My Laptop, My Friend – a Tribute”