Elle Spellman draws inspiration from her love of comics to create stories about the heroines we all want to be.  She found time in her busy schedule to tell me a little more about herself and her work. 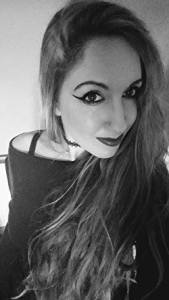 If you could have just one superpower, what would it be?

Hmm, there are so many possibilities! Being a comic fan, it’s a question I’ve always pondered. I guess it would all depend what would happen to me to get my power! Personally I’d love super strength like She-Hulk (she’s one of my favourite characters!), or sentient hair like Medusa from Marvel’s Inhumans series. But in reality I’d have to be sensible and would probably take teleportation, to get more time in the day!

I see that you like comic books; do you have a favorite?

I like so many! But I’m a huge Batman fan and my favourite is probably Batman: Year One.

What do you do when you aren’t writing?

When I’m not writing, I’m reading! I run a book blog about women’s fiction called Super Heroines, so I’m always on the lookout for new books to feature and review. Aside from my bookish and nerdy interests, I also love running and keeping fit. I have a full-time job, too. My life is a busy one, but I enjoy every minute of it.

That’s tricky! I tend to have porridge with blueberries most days, or pancakes with fruit. But let’s face it, who doesn’t love a huge bowl of chocolate-covered cereal now and again?

I love coffee, but I’m more partial to tea. I drink a coffee each morning and tea during the day! I also have a chamomile tea at night.

Who are your greatest influences that you know in real life?

Being a book blogger, I have been lucky enough to meet so many talented authors that have influenced me, but my greatest influences are my mother and grandmother. They always encouraged me to read and write from a very young age, helped me with my stories, and encouraged me to send my work to publishers. Sadly my grandmother passed away when I was younger, but she will always be a huge inspiration to me.

Do you participate in NaNoWriMo?  Why or why not?

I do indeed! I love NaNoWriMo, maybe because I’m quite deadline-driven, so I like having that end goal in sight. There’s a great feeling of achievement once you hit that magical 50k, but I always know that even if I don’t get there, just half of that target is something to be proud of. Plus, with so many people across the globe taking part, there’s a great sense of community that can keep you inspired. I’ve completed NaNoWriMo for the past three years and hope to again this year (I tend to take a week of holiday in November to lock myself away and write!)

I always find myself wandering into bookstores when I’m in town, just looking at all the new novels and the beautiful covers, trying to refrain from buying them all! Books are my weakness. That said, Bristol has a fantastic central library in a beautiful old building which I really should go and visit more often.

Where’s your favorite place to write?  What’s your writing process like?

Honestly? I write anywhere. At home, in coffee shops, in notebooks at work on my lunch break or on the train home. Ideas tend to pop into my head at the strangest moments so I always keep a notepad and pen handy! I tend to work best when I have a short time frame, such as an hour before the working day begins, or some time before bed. I don’t have a specific schedule, and kind of envy writers who can set one and stick to it! (Tips greatly appreciated! Hehe.)

Tell us a little bit about book #2!

I can’t really say much about it just yet, but it’s a completely new novel. It’s contemporary fiction with magical realism; light-hearted but at the same time rather dark, so quite a bit different from She’s Bad News.

Elle can be found on Twitter at @capesandcorsets.  She also maintains a personal blog and a book blog.  Check out She’s Bad News on Amazon UK, Amazon US, and Goodreads.  Read more about the book below:

What would you do if you woke up with super powers?

For Bella Brown, life hasn’t gone according to plan. She’s almost thirty, still living in her uneventful hometown, and her dreams of becoming an investigative reporter have fallen by the wayside.

That is, until she wakes up one morning to find she’s been gifted with some amazing new abilities. What’s a girl to do with heightened senses, super speed and the ability to lift a truck one-handed? Bella quickly discovers that her new powers can easily help her land front-page leads at local newspaper, The Hartleybourne Gazette.

Soon Bella’s out every night chasing down local criminals for stories, while keeping her powers a secret from everyone besides flatmate Chloe. But when a burglary-gone-wrong accidentally turns her into the mysterious Hartleybourne Heroine, Bella finds herself on the front page for the wrong reasons. Her secret becomes harder to keep as she tries to track down the source of her powers, and especially when crime reporter Matt Gilmore is intent on unmasking the town’s new vigilante…

Suddenly, having an extraordinary life is far more dangerous than she ever imagined.

Elle Spellman is a writer and comic book geek living in the South West of England. She’s been writing since a very young age, spending her childhood afternoons penning stories about fictional adventures, and illustrating them too.