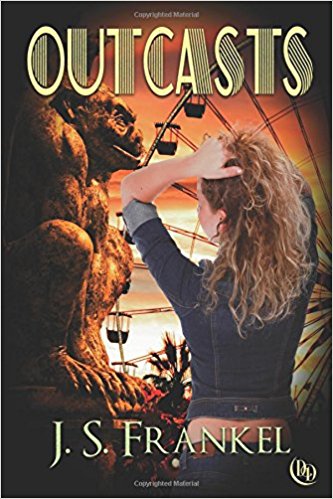 Stepping Out of Your Comfort Zone – Guest Post by J.S. Frankel

It’s easy to write what you know. As a guy, white and cisgender straight, that’s what I started writing roughly six years ago because it was what I knew best. I wrote about white dudes and dudettes, introduced outlandish (at times) situations, had fight scenes and romances and it was all very good.

After all, I had to go with what I knew and pen a story about it. That’s what the experts say, and who are we to question them?

But is it the best way to improve? It depends. It’s my contention that a writer can improve within the genre they’ve chosen, working on narrative, dialogue, action, and so on, without having to switch to another genre.

At the same time, though, some writers can become complacent, coasting along on the formula that got them noticed in the first place. So, it depends.

In my case, not only did I want to improve my narrative technique, I also wanted to grow as a writer. For me, that meant stepping out of my comfort zone. It meant writing about the unfamiliar.

In the past, I’ve written lesfic as well as explored transgender issues. I did this because those two areas are unfamiliar to me, because there are people who are in the LGBT category, and because they have their own stories to tell, that is, the characters that I wanted to write.

If you are going to step outside your comfort zone, how you approach it is up to you, but this is what I’ve learned.

1. If you don’t know–ask. With the transgender crowd, I asked a few people to tell me their experiences. They were more than willing, and I incorporated their ideas.

2. Do your research. I cannot stress this enough. If you’re going to write about something unfamiliar to you, research it first and then research some more. Then ask if you are truly stumped. A wise person admits their ignorance; a fool does not, and thereby exposes everything.

3. Expect to be called on it. In fact, even if you’re writing about something you know, chances are at least one person will call you on it. When writing about a different orientation, the chances of messing up are doubly so, so expect criticism.

That’s what happened to me. Some of it was justified; much of it was not. It had nothing to do with the style or the narrative. Some people simply couldn’t accept a straight guy writing about lesbians. That’s how it goes.

4. Make the characters real. An excellent novel I read, Crimson Fire, had a black lesbian as the main character. The way the writer, Mirren Hogan, approached it, was nothing short of incredible, and yet it was so naturally and simply done, I had to keep reading.

Her main character said that she preferred women and that was that. No muss, no fuss, no much ado about anything; it was stated clearly and it is to Ms. Hogan’s credit that she not only created a very fine novel, it also showed her main character in a very positive light. The orientation of the character turned out to be unimportant. It was the character, what she did and how she conquered, that was the most compelling part of the story.

To me, that’s how you should portray someone who is different from the default, not dramatizing, but simply showing.

Even if you do everything right, see point #3. Sooner or later, someone will take offense at what you write. It doesn’t matter how good it is or how sympathetic the characters are or how well it’s written…at least one person will always find fault with what you do.

That’s the risk every writer must take. It is then up to the writer to either accept that criticism–if justified–or discard it. In any case, keep writing. That’s been my mantra from day one. To quote Captain Picard: “Make it so.”

J.S. Frankel was born in Toronto, Canada and grew up there, receiving his tertiary education from the University of Toronto and graduating with a double major in English Literature and Political Science.

After working at Gray Coach Lines for a grand total of three years, he came to Japan at the age of twenty-six and has been there ever since, teaching English to any and all students who enter his hallowed school of learning.

In 1997, he married Akiko Koike. He, his wife and his two children, Kai and Ray, currently reside in Osaka. His hobbies include weight training, watching movies when his writing schedule allows, and listening to various kinds of music.

His novels, all for the YA set, include Twisted, Lindsay Versus the Marauders and it’s sequels, Lindsay, Jo, and the Tree of Forever, and Lindsay, Jo and the Well of Nevermore, all courtesy of Regal Crest Enterprises. He has also written the Catnip series (five novels), Mr. Taxi, The Titans of Ardana and its sequel, The Titans of Ardana 2: Battlefield, along with Picture (Im)perfect and more novels, courtesy of DevineDestinies.com.

You can find J.S. Frankel on Amazon and Twitter.

Filed under Guest Posts, On Writing