Book Review: Five Weeks in a Balloon by Jules Verne

It’s not often that I have a cold, rainy Saturday with nothing to do.  Oh sure, there are plenty of things I could have done, but since I didn’t have to I decided to finish this book.

Five Weeks in a Balloon is the first in a collection of seven novels in this gorgeous volume I picked up at Barnes and Noble a few months ago.  The tale follows Dr. Ferguson, Dick Kennedy, and the faithful Joe Wilson as they traverse Africa in a balloon, attempting to investigate the depths of the continent that have up until that point been unreachable by other explorers traveling on the ground.

Verne, as always, did a fantastic job with his description.  As the trio explores vast landscapes, battles dangerous animals, and fights the elements, the reader is easily pulled into every scene.  They say that as a writer you have to learn how to torture your characters in order to make a good story, and that most certainly happens in this novel.  The characters are almost constantly in danger of some sort, just barely pulling free before it’s too late.  One of my favorite examples of this is when the men in the balloon pull a man from his horse to safety as he’s being pursued by a group of angry horsemen.

A tale of exploration, peril, and constant adventure, I recommend Five Weeks in a Balloon to anyone looking for a little excitement.  I would also suggest that the reader keep in mind the fact that this book was published in 1863, so the rather Eurocentric viewpoint is a manifestation of its time in history. 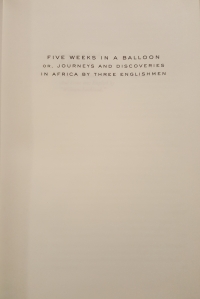