Having lived both in Canada and the US, Catherine Bannon gives a unique perspective to experiencing two different worlds.  She has used this understanding in her writing, and I got the chance to chat with her about that.

I see that you were born in Canada but live in the U.S.  What do you miss most about Canada?

I’ll be honest, I’m not sure how best to answer that. I was eleven when we moved to the US because of my father’s work, so my memories are those of a child and I’m not sure of their accuracy. I think Canadians are better about respecting your personal space; Americans are so friendly and open and that’s not a bad thing at all, but I’m just made so that I need a wide space around me. And I’ll probably make some people mad with this but when it comes to the concepts that America is supposedly all about, the “Land of the Free” and the “All Men Are Created Equal” type thing, quite honestly I think Canada does it better. On a more personal level, I wish I could have grown up closer to my cousins; there are some I haven’t seen for thirty or forty years just because we live so far apart. And one of my absolute favorite places on earth is the Banff National Park. I probably wouldn’t have been able to get there any more frequently from Ontario, but I still miss it.

What has writing this book done for you?

It’s made me more completely aware of how much I still identify as a Canadian. Jillian is not Canadian; she’s British, but the point still holds. I’ve lived in the US most of my life and all of my adult life, but there’s still something in me, when the wheels of the plane set down in Toronto or Calgary or Vancouver, or when the car clears the Customs station, that settles down happily, sighs, and says, “Home!” I love my home in the Boston area but that little inner something is never completely satisfied until I’m north of the border.

Was there anything specific that inspired you to write this book?

I first started thinking about writing Imperfect Cadence when a friend of mine kept asking me, “Is that a Canadian expression? I never heard it before,” on a fairly frequent basis. I began to realize that I didn’t even know, a lot of the time, whether the idioms I used were Canadian, British, or American as all three had an influence on my speech. That started me thinking about culture shock, and my realization that even after spending most of my life in the US I still was undergoing a certain amount of culture shock that I’d never really gotten over. So I started writing Jillian’s story, and how she tried to reconcile the more reserved British culture she was used to with the more relaxed US culture here. They are similar in many, many ways but there are subtle differences that will over time become more evident. I wanted to try to make my readers see that, as great a country as the US can be, it isn’t the whole world.

That’s a really, really hard question. It changes every week. I suppose if I had to pick just one, it would be either Anne of Green Gables or The Lion, the Witch and the Wardrobe. Both children’s books, but both books that have a lot to say to adults on many levels as well.

What are you reading right now?

Right now I’m re-reading the books of Charlotte MacLeod. She’s also a Canadian author who lived in the US, and her books are very, very funny. They’d qualify as cozy mysteries, I think, but the characters are drawn somewhat larger than life and in fact are deliberately overdrawn. She died a few years back and I’m still mourning that there won’t be any more of her wonderful stories.

With working at a university, how do you find time to write?

I have to use all my time as effectively as I can. I use my commuting time to do my plotting and planning; I named all the characters in Imperfect Cadence while at a baseball game. My husband is very good about doing things like the dishes and his own laundry to leave me time to write, and I can sometimes make time during the day by bringing my lunch, eating it at my desk and using my lunch time to write. I try to get a couple of writing hours a day during weekends and when I can after work. I always have a pen and notebook with me so I can jot down ideas as they come to me.

Do you have more books coming?

I certainly do! Pas de Deux, a sequel to Imperfect Cadence, should be coming out in late winter or early spring; I’m just doing the last revisions on it now. It picks up the story about a year and a half after Imperfect Cadence leaves off but follows when Joyce, Jillian’s next door neighbor in the States, goes to graduate school in London. I have plans for a couple more books in the series but I’m not ready to talk about them yet. I’m also working with a co-writer on a series of contemporary mysteries about a different set of characters, but set in the same universe as Imperfect Cadence, and also on a series of historical fiction with a paranormal twist. 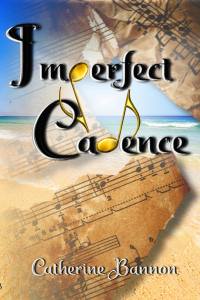 Catherine Bannon was born in Canada and lived there until her family moved to the United States while she was in middle school. Despite living in the US for most of her life, she still finds the mix of cultures confusing, which is why she wrote this book in the first place. Catherine likes to travel but doesn’t have to time to do as much of it as she wants. She also is fond of classical music, which drives her classic-rock husband crazy. Catherine likes to cook, and her idea of hell is being stuck somewhere with nothing to read. She likes cats, but doesn’t have any at the moment because her husband is allergic to them. Occasionally she borrows a friend’s cat or dog just to get her “furry friend fix”. Catherine is a Christian and sings in her church choir. The church that Jillian, Josh and their families attend is the same one she went to for many years before she got married and moved out of town. Catherine works in the Employee Benefits office of a university in Cambridge, MA. She is married to Brad Bannon, a political analyst and adjunct political science professor. They live in Marshfield, MA, which is just south of Scituate. You can check out Imperfect Cadence on Facebook and Amazon.