I’m one book closer to completing my bookshelf cleanout!  Okay, let’s face it.  This is going to take an eternity, but at least I’ll enjoy it in the process!  The latest selection was Conqueror’s Moon by Julian May.

On a remote island, far in the Boreal Sea, four kingdoms have struggled against one another since time out of mind. Most mysterious is the marshland kingdom of Moss—feared by the others and ruled by the Sorcerers. Soon, all will be put in peril’s way.

In recent years, three of the kingdoms have suffered fearsome volcanic eruptions that choke crops, famine among people, and an ailing leader on his deathbed. Only Moss, poverty-stricken and desolate at the best of times, seems untroubled.

But Prince Conrig of Cathra, who waits patiently as his father, the king, wastes slowly away, is in league with his lover, the seductive sorceress Princess Ullanoth of Moss. And if their secret alliance succeeds in its goal, the warring kingdoms of High Blenholme will be united once and for all—under the iron hand of one supreme rule.

Conqueror’s Moon is an intriguing tale of royalty and class, romance and politics, and plenty of fantasy and magic!  The first few pages definitely had me hooked and wanting to know what was going to happen next.

What stood out to me a lot with this book is how well-developed the characters are.  Each of them have their own backgrounds and personalities, making this very much a character-driven plot.

The description and setting were also excellent as May painted a picture of a very detailed fantasy world that I could see clearly in my mind as I read.  The maps included at the front of the book are also helpful.

What I Didn’t Love as Much:

This is definitely not what I’d call an easy read.  There are too many characters and places to keep track of, and of course they all have fantastical names that make it a little harder.  That plus the numerous political meetings meant that this book was most enjoyable when I had a nice, quiet space to read in.  I don’t always have that luxury, so about halfway through I wasn’t sure I was ever going to finish.

The end of the book wasn’t as neatly tied up as I would prefer.  I know it’s just the first in a series, and I can appreciate the author wanting to leave the reader craving more.  That part was achieved, but I do wish there had been a little bit more of a conclusion so I’d feel like I truly got to the end of the book.

While I think there’s some potential here, it was just too hard to get into the book.  I’m curious to know what happens in the sequels, but I don’t know that I’ll actually read the rest of the series to find out.  Maybe this would be a better fit for me if I wasn’t a busy working mom and had more time to really focus on it, but I can’t say I was extremely impressed.  3 stars.

Ashley O’Melia is an independent author and freelancer from Southern Illinois. She holds her Bachelor’s Degree in Creative Writing and English from Southern New Hampshire University. Her books include The Wanderer’s Guide to Dragon Keeping and The Graveside Detective. Her short stories have been published in The Penmen Review, Paradox, and Subcutaneous. Ashley’s freelance work has spanned numerous genres for clients around the world. You can find her on Facebook and Amazon.

I’m a sucker for signed books, and apparently that even counts for books I’ve never read.  Every now and then, Barnes and Noble carries signed book on their shelves, and that’s how I ended up reading The Phantom Tollbooth by Norton Juster. 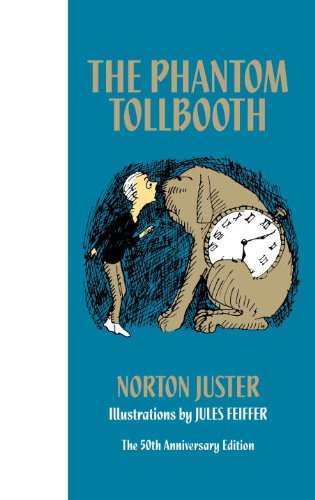 Now, I realize there are probably a lot of people who read this book as children, and those same people may find themselves wondering why I would choose to read a book meant for kids at the ripe old age of thirty-*coughcough*.  To them I say, pick it up and read it again.  Maybe you’re not as grown-up as you think.

Synopsis:  Milo, who’s generally a little bored with life, finds himself on a thrilling adventure in a distant fantasy land.  He encounters wild and magnificent creatures and people along the way.

What I Loved:  There’s just so much to love about this book, and I doubt I’d manage to get it all into this review.  This work of pure genius is like a thesaurus set to fiction.  It’s Labyrinth meets Willy Wonka meets Alice in Wonderland meets A Wrinkle in Time, with a little bit of Monty Python thrown in.  It’s goofy and ridiculous but completely engaging.

Juster created not just a world of nonsense where everything in we know in our reality is skewed and taken out of context, but a fun story that might even be thinly veiled social commentary.  After all, there’s a lot of chaos when the Princesses Rhyme and Reason are in exile.

With endless wordplay and marvelous fantasy worlds, The Phantom Tollbooth is highly entertaining.  Even the introduction was worth reading, as were the notes from other authors in the back.

It seemed a great wonder that the world, which was so large, could sometimes feel so small and empty.

If you want sense, you’ll have to make it yourself.

“You’ll find,” he remarked gently, “that the only thing you can do easily is be wrong, and that’s hardly worth the effort.”

What I Didn’t Love So Much:  I honestly don’t think I have anything to say here!

Rating and Recommendation:  If you enjoy fantasy, puns, and playful dialogue, or maybe if you’re just a kid at heart, I highly recommend The Phantom Tollbooth.

This book is technically part of my Bookshelf Cleanout, and it’s one I’ll be keeping with the rest of my signed copies.

A captivating romance that transports the reader completely!

I don’t usually read romance novels.  I know–I’m a woman in my thirties.  Isn’t that what I’m supposed to read?  At least, when I was a kid I assumed that was what moms always read.  I often choose my reading material based on what I’m currently writing, and I felt I needed to step up my game when it comes to the romantic aspect of my ghostwriting projects.  My book of choice is now also based on my Bookshelf Cleanout.

Enter Dawn Encounter by Jennifer Blake, a book that had probably been sitting on my shelf for at least a couple of years.  I’d grabbed it from a library book sale, filed it away with the other numerous books I hadn’t gotten around to yet, and pretty much forgotten about it until now.

From the Cover: Lisette Moisant is desperate. She had no love for the husband foisted upon her in an arranged marriage, but his death in a duel with famed fencing master Caid O’Neill has left her at the mercy of her rapacious father-in-law. As Caid is the only man in New Orleans he fears, as well as the cause of her misfortune, she requests the sword master’s protection.

Guilt, fairness and reluctant attraction to the valiant widow compel Caid’s agreement. He expects the arrangement to be short-lived, but that’s before the whispering campaign begins. Lisette is accused of being a wanton who persuaded Caid to trick her husband into a duel. Caid is labeled a murderer. Public sentiment rises against them along with the demand for punishment—and who better to mete it out than the dead husband’s father?

Caid and Lisette may overcome the sordid and deadly forces ranged against them—but how are they to fight the convention that forbids love between an heiress and a master at arms?

What I Loved:  I have to be honest here.  I was expecting flat characters, simpering women, and men who were reckless jerks.  But I was very pleased to find deep characters with fully-fleshed backgrounds and sensible emotional reactions.  Sure, you throw in a bit of stubbornness and a few impetuous decisions to keep the main characters apart for a while, but not the unbearable stereotypes I was expecting.

This is actually the second book in the series, which is something I didn’t even realize until I pulled it up on Amazon while writing this review!  I think that’s impressive, considering I didn’t feel as though I was missing out on anything.

What’s even more pleasing is the fact that Jennifer Blake has either done her research on New Orleans in 1840 or she has a time machine.  While you might not typically think of a book as being visually stunning, Dawn Encounter definitely is.  Historical fiction is a genre I’ve returned to many times over the past decade or so, and there were many instances when I felt this book fell just as equally in that category as romance.

What I Didn’t Love:  This is still a romance novel at heart, so it does contain some pretty typical tropes:  the woman who’s determined to be independent no matter what a bad idea it is, the stubborn man who refuses to acknowledge his own feelings, and the horrific villain he must save the heroine from.  But I can’t really complain about any of that, since I think this is what we’ve come to expect from a romance novel.  And since it does help the plot along, it works.

There were a few minor typos, but in a book of this length I would expect that.  It was nothing major and didn’t detract from the story.

Rating and Recommendation:  If you love romance and historical fiction, then I highly recommend Dawn Encounter.  You can even read it for free right now through Kindle Unlimited! It was an intriguing read that was so much more than I expected.  I do believe (once I’ve made a little more progress on my Bookshelf Cleanout) that I’ll be picking up the first in the series.  4 stars!